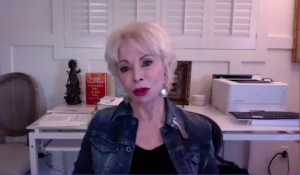 The concept of escaping into fictional worlds resonates with readers of all ages, backgrounds, and interests. For Isabel Allende, the journey began when she found a rusted green metallic bin filled with adventure books in the basement of her childhood home in Chile. The bin bore the initials JA, which she later learned belonged to her father, who abandoned the family when Allende was three.

“His legacy to me was a trunk filled with books,” she said. Those stories—penned by Jack London, Mark Twain, Charles Dickens, and Emilio Segade, among others—sparked a love of reading, a passion for equality, and a thirst for independence. Allende will talk about her new memoir The Soul of A Woman with Kali Fajardo-Anstine during “An Evening with Isabel Allende, opens a new window,” a virtual event hosted by Jefferson County Public Library (JCPL) March 5. Space is limited, so register today.

The ability to connect and empower girls and women is a key driver for Allende, who said books helped guide her journey and hopes The Soul of A Woman will do the same. “If, in any way, this book can help a young woman I would be very proud.”

Books have played an important part in Allende’s life starting with weekly magazines she would race home from school to read before her brothers. Hear her share this story., opens a new window As a teenager living in Lebanon, Allende recalls rummaging through her stepfather’s locked armoire to read his books including 1001 Nights (The Arabian Nights, opens a new window) while her brothers sipped from whiskey bottles, flipped through Playboy magazines, smoked cigarettes, and nibbled on chocolates. Allende and her brothers covered their tracks by watering the whiskey (in case the bottle was marked), never eating a whole layer of chocolates, and never finishing a pack of cigarettes.

“In the early ‘50s in Lebanon girls didn’t go anywhere. We didn’t have a life,” she recalls. Perhaps, as a result, “I would read anything I could get my hands on.” Hear Allende describe this experience, opens a new window of reading this book with a flashlight in the armoire, which she describes as “an initiation of eroticism at a time when my hormones were exploding and fantasy…. It comes back to me when I write,” she said, “the idea that things have a smell, a color, a texture; they taste somehow. That eroticism and sensuality is not about sex only; it’s mostly about the other senses and so all of that is part of what I write. I think that comes from very early on in Lebanon.”

The Female Eunuch by Germaine Greer opened a door for Allende. “It was the first time I saw in print what I was feeling,” she said, “the sense that the world is unfair, the anger… It changed everything for me.” I remember thinking, she continues, “Oh my god I’m not alone, I’m not a lunatic. There is a movement out there!”

This sense of community and belonging delivered through books is a theme that connects Allende with Kali Fajardo-Anstine, a celebrated Colorado author, who will facilitate the JCPL Author Talk.

The Soul of a Woman taps into what Allende describes as her trajectory as a feminist, a theme that has marked her life, though she shirks titles that can be polarizing. “It doesn’t matter what you call it,” she said, “just do the work.”

By work, she means engaging in activities that empower girls and women to reach their full potential. “I have always been aware of the inconvenience of being a woman in a society where the male gender has privileges that women do not,” she said.

At 78, Allende is in the perfect stage of life to light the torch of girls and women. Listen to her talk about the women who lit her torch, opens a new window and her interest in inspiring others to join her in this meaningful work. “I’ll light yours but I’m not going to give you my torch until I’m demented. Not before!” 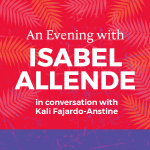 to hear world-renowned author Isabel Allende in conversation with Kali Fajardo-Anstine, an award-winning author from Colorado, on Friday, March 5, from 6:30 - 8 p.m. Or sign up to request a link to the recorded event with original audio. Available until April 5.