Edgewater Library is temporarily closed due to building maintenance.

Libraries are currently offering curbside and walk-in services. Please confirm your location is open and what services are available, as well as read our COVID-19 Code of Conduct before visiting. LEARN MORE

After a long work day, it’s not unusual to spot locals sidling into the welcoming open room of West Fax Brewing Company in Lakewood, Colorado. They nod to the familiar bartender, wave hello to fellow-frequenters, pat one of the many tail-wagging dogs at their feet, then nurse a pint of one of Colorado’s signature brews while catching up with friends. One Wednesday a month, however, the scene takes a turn for the slightly more unusual. Set among the colorful and cheerful atmosphere is a Library book group, full of colorful and cheerful characters itself.

In summer 2018, Jefferson County Public Library launched a new take on the traditional book club with BYOB(ook) Group. The group, hosted by Belmar Library, offers readers the chance to select their own books from a theme, genre or topic; then come prepared to talk about these titles in a casual, happy-hour-friendly atmosphere.

Kelsea Dombrovski (30) is a recent transplant to the Denver-metro area from Ann Arbor, Michigan and one of the cheery regulars of BYOB(ook). She attended her first book group at Westfax Brewing Company in August 2019. Her interest was piqued by this alternative book group after she found out about it through Facebook.

“I’ve been in a book group before, and it wasn’t very successful. The books that were selected didn’t really appeal much to me, so I had a hard time finishing them and felt bad going without having read the book,” Kelsea says. “With BYOB(ook), I’m always excited to read the books because I get to choose them.”

Beyond the format of group, Kelsea was drawn to BYOB(ook) for its location, which she says has helped her feel more at home and connected to community in a new city.

“Having it at WestFax is super fun,” she says. “Being new to the Denver-metro area, BYOB(ook) gave me a chance to go to a well-known area that I didn’t know anything about. I learned about more events, like trivia, and you get more of a community feel.”

Kelsea moved to Colorado just over a year ago. While she works in local county government as a city development planner, her roots are in libraries.

“I have a strong allegiance to libraries and programming. My first job ever was working at a library,” she explains. “And I’ve traveled around a lot. The very first thing I do [in a new place] is get a Library card. That’s where I go to get materials, sign up for programs and use resources. It helps me get the lay of the land; it’s my anchor point.”

As someone who has moved around a lot, Kelsea often finds herself looking for ways to connect with people around her age: “It’s hard to find other folks around my age. I would love more events for adults and young professionals. That’s why it’s great that something like this [book group] caters to my age group a bit more,” she says.

So far, Kelsea’s favorite theme has been graphic nonfiction. She chose You & A Bike & A Road, opens a new window about author and illustrator Eleanor Davis’s cross-country bike ride across the southern US.

“I never would have picked this up on my own before BYOB(ook),” she says. “With the genre/topic theme, it’s pretty wide open and leaves things to interpretation. You kinda get to choose your own adventure.” 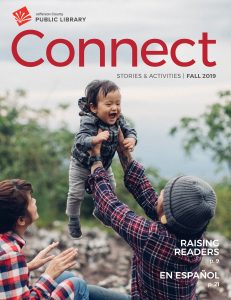 Keep up with the latest stories and happenings about JCPL. There's something for everyone. And it's all free at your Library.

Find your FREE copy of Connect in local grocery stores and businesses, all JCPL locations and online, opens a new window.

Read this article in the digital edition, opens a new window.