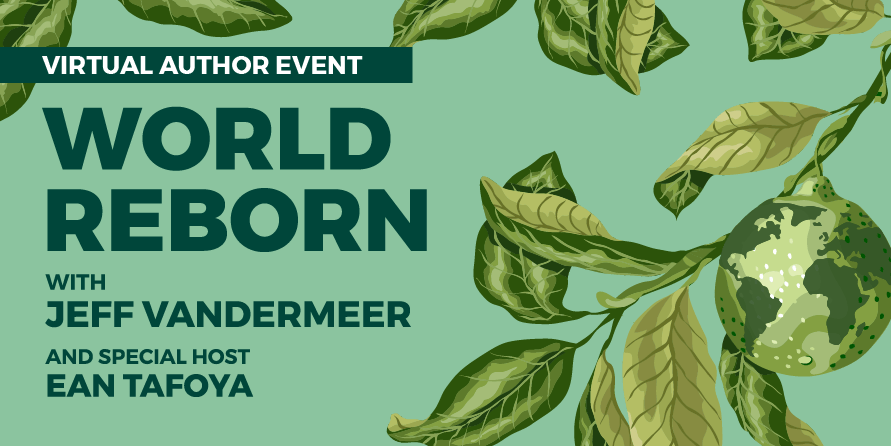 Equal parts inspiring, exciting and humorous, this year’s spring author event World Reborn with bestselling author Jeff VanderMeer and local activist Ean Tafoya was a can’t-miss event. If you’d like to revisit the conversation or watch it for the first time, the full recording is now on our YouTube channel! Fill out the post-event survey to help us continue to create programming that is relevant to you and our community. All survey participants will be entered to win a prize drawing of Jeff’s books!

With so much ground to cover during the event, there were a handful of questions submitted by the audience that didn’t get answered during the event. Graciously, Jeff offered to write up answers, which we are excited to share with you below.

Hi Jeff! Thanks for visiting my hometown library. Can you talk about some of your influences in terms of books and other art forms?

Oh gosh—so many. It's tough to really answer that question as it can be so different from novel to novel, even though real life is usually the biggest inspiration. Right now for the ravine novel I'm working on, books like Architecture of Nature are a huge influence.

Who are the literary masters you aspire to? What works have continued to motivate your craft?

Early on I was very much influenced by writers like Angela Carter, opens a new window. I think Stepan Chapman's The Troika, because it successfully breaks so many rules, is still an influence.

Every time I listen to your books, I feel like I am listening to a different book or I find completely different hidden meanings. Is that on purpose or is that subjective to the reader?

The novels I love change with the reader and have hidden depths and meanings that may only reveal themselves on a re-reading, so it's definitely something I hope works in my fiction.

Do you have a message in mind before creating the story?

Not really. Theme in my work seems to come about organically, and then after I write a draft I might ask myself what the main theme is and keep that in mind in revising.

Is it difficult for you to choose the topic of what you want to write about?

One blessing I have is getting too many ideas, perhaps because I reward my subconscious by writing down every little thing that comes to me. This seems to create a positive feedback loop so I get more and more ideas. Mostly, I have to choose which idea to work on first.

Do you have a favorite among all of your work?

Dead Astronauts really restored me to my core self, writing-wise, after all the hullabaloo over the Annihilation movie. I could've lost myself in a sense, given the amount of media attention. But writing Dead Astronauts grounded me again.

Was there a book or series from your childhood that you feel influenced you to become a writer? Or is there a book that you love so much that you might one day consider writing an homage to?

I was given Lord of the Rings and the Narnia books when I was 7 or 8 and too young to really understand them. So the mystery of those books stuck with me. But not necessarily the plots or characters. More the sense that books are mysterious things that one is not always meant to understand the totality of.

What states have you traveled to? Have any of these places influenced your books?

I'm most familiar with the entire East and West Coast, which at various times I've driven the length of. I would say the West Coast has had the most influence and up into British Colombia. Something about the richness of the forests.

Did your travels in Upstate New York inspire any new ideas for fiction?

I met Dr. Meghan Brown, who created the hummingbird and salamander in my novel Hummingbird Salamander, so definitely.

How long did it take for you to write the two short ones? You only said they were short. You didn’t say how long it took.

Of the Southern Reach? Or the new ravine novel series? Regardless, once I have 30,000 words of rough scenes and notes and sit down to write, it might only take three months to finish. But that's because I've also thought about what I'm going to write for a long time before I write it.

I've come to think of the Southern Reach trilogy as a blend of cosmic horror and psychological horror. Would you consider that an accurate take? Did you set out to tell a story through that lens, or did it evolve that way?

There's some cosmic humor in there, too. I just followed a story in which I thought I'd be using the conventions of the uncanny merged with the absurdity of human systems to interrogate a situation beyond human comprehension.

Have you seen the Voynich Manuscript? If so, did it inspire some of the plants in Annihilation?

What illness did you have when you were on the set (of Annihilation)?

I had C. diff, which is a very dangerous thing given antibiotics work less and less. I was down to the last antibiotic that would work, and thankfully, in time, it did.

I’m curious about your opinion on using a synonym for a new book if you've already published a few low selling works. Would an agent be more likely to consider your project if you use a new name not associated with the old works in this instance?

I've seen this used effectively and may even make sense if an author makes a hard pivot from, say, military SF to contemporary humor or something. It really just depends, though, because the marketplace can be more forgiving than you might expect, especially if you're only writing novels every 4 or 5 years.

You communicate so much respect and empathy for animals in so many of your books, which is something I really love about them. Do you intend for your books to increase readers' compassion, respect and empathy for animals, and to cause us to question our unethical treatment of them (i.e. factory farming, environmental destruction)? If so, what are your thoughts on ethical movements like veganism?

I just want to convey something realistic or psychologically true about the nonhuman. I see too many novels where the animals are based on outdated animal behavior science or in some other way reduced to props for humans. I want to avoid that to show that regardless of how animals measure up to human intelligence (and there are other kinds just as valid), they have their own agency and lives and emotions.

Jeff, you have a voice. What do you recommend we do to show people how undervalued other species are (assuming you feel it is our responsibility to take care of them in a human/anthropocene world)?

It goes further—we can't exist without them or the earth systems they sustain.

In your activism work, what organizations do you suggest others follow or financially support if they’re able?

What is an element of the environment that you haven’t written about yet, but are excited to?

I have a novel I'll get to called Drone Love that imagines a world in which ecologies have evolved to coexist with plastics and huge escaped biotech monsters from decadent late-era operas for elites still sting arias even as they launch attacks on the remnants of those elites.

What is your favorite type of pen?

I try not to have favorite pens or writing pads, as it can get in the way of the writing.

To steal that wildflower from the neighbor's yard? Pure botanical greed.

To crawl through pine mulch to take that photo of a pileated woodpecker working on a dead log on the ground? I still don't rightly know.

Many local governments are in fact dominated by people from banking, real estate, and development. Do you think is essentially represents a conflict of interest that should disqualify them from these public office positions?

No, it doesn't automatically represent a conflict of interest--but, for example, in an adjoining county, Wakulla, they have no ethics ordinance to speak of, so a commissioner can be a business owner and vote on an issue that affects their business with no constraint, really. That's wrong. And then when you see pressure from these powerful interests brought to bear on newspapers and other institutions means to serve the community, it becomes corrosive of the public good.

Thanks for being here Jeff! I actually learned about “rewilding” through the Guardian article that featured you and your efforts. Any tips for getting started with rewilding a yard? PS. Very excited to hear about the AMC Borne series and not at all surprised to hear the bear was inspired by a house cat.

I have some thoughts on my blog and in online articles that you can find with a search pretty easily. I'd hate to forget something to tell you that's already in those.